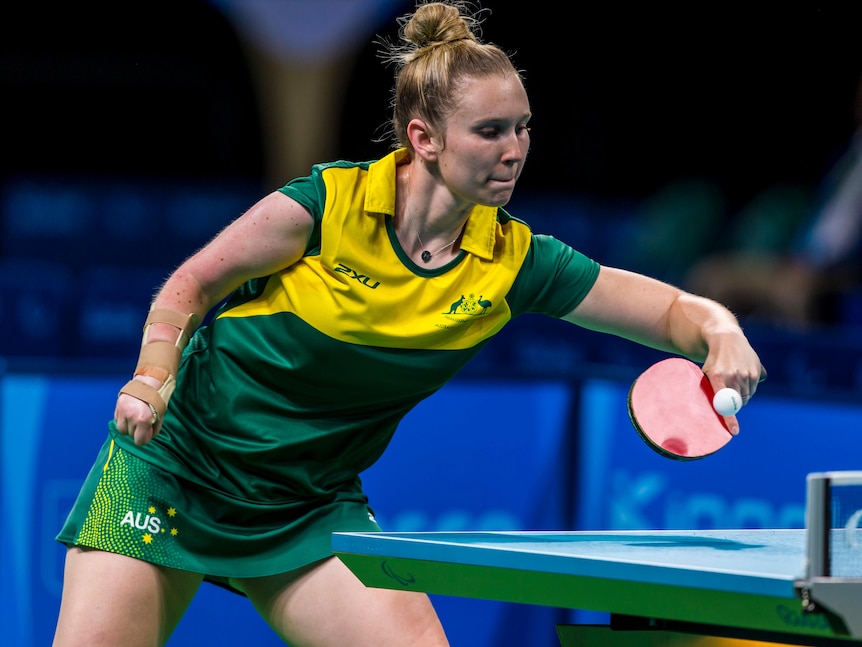 She is ranked number three in the world.

She is a Commonwealth Games gold medallist, a world championships bronze medal winner and is now on target for a podium finish in Tokyo.

Milly Tapper will head to her third Paralympic Games in August with a history of achieving her goals.

“I find it quite fun to set myself goals and it’s always nice if you do get to check them off,” Tapper said.

“The last one I really want to check off is a medal at the Paralympic Games … we’ve been working very hard towards that.”

Tapper competed at the Olympics and Paralympics in Rio in 2016, becoming the first Australian athlete to achieve that feat in the same year.

“That came about as a childhood dream, to try and compete in table tennis for Australia,” she said.

She was born with nerve damage in her right arm, resulting in Erb’s palsy. She has never considered it a disability.

“As I went through the years I tried qualifying about two or three times for the Olympics and missed out, several Commonwealth Games and missed out, then 2012 was my first Paralympic Games,” Tapper said.

“[That] Helped in terms of progress in international results and then come 2016 it was a very successful year for me — I qualified for both the Olympics and Paralympics and made it a dream come true.”

Tapper has a knack for making things sound easy, but the reality was very different in 2016.

“It was definitely pretty hectic,” she laughed.

“Then once the Paralympics were over, it felt like a steam train had hit me front-on.

“When I actually got to stop and switch off, that was when I really did feel it … thankfully I’ve got great people around me that help manage that.

“In the moment it is exciting, and you sort of just keep riding with all the adrenaline that comes with the Games.”

In Tokyo, Tapper’s focus will be solely on the Paralympic Games, where Australia will be taking its largest table tennis team in history, with 11 athletes having already qualified.

In the Class 10 classification in which Tapper competes, she is currently ranked number three in the world behind Poland’s Natalia Partyka and Australian teammate Yang Qian.

“I’ve done everything, given the circumstances as well over the last year, to put myself in the best position to [win a medal],” Tapper said.

“We’ll get over there and compete and see how we go, but regardless of the result I’ve absolutely loved in particular the last two years of training and preparation.”

With the assistance of an Australian Institute of Sport grant, the team has been able to train on eight newly purchased San-Ei tables, the same as those they will use in Tokyo.

“It definitely does make a difference … there’s been a lot of adjusting to that,” Tapper said.

“Some [tables] can be faster so the ball might slide through, or slower and the ball will stop, so it’s really good we have the opportunity to adjust.

“Everyone’s different in terms of their style and what they prefer … I would say [these tables] are slower so there’s an adjustment particularly for me.

“For example, the ball won’t come through, it will stop, so I need to remember to move forward more.”

The squad’s former tables will be donated to community groups, potentially enabling the next Milly Tapper to emerge.

“I started when I was eight years old in primary school at lunchtime sport for fun, so now I’ve been competing for close to 23 years,” Tapper said.

“I think that’s the awesome thing about the sport, everyone has played it at some point in time and it doesn’t matter what age you are, or ability, everyone can enjoy it.”

Despite Tokyo being on the verge of a fourth coronavirus wave, Tapper — like most athletes —  does not waste time worrying about situations she has no control over.

“To be honest, the only updates I generally get are from the people around me because I’m not much of a news watcher,” she said.

“Sometimes I’m like, ‘Oh, is that what’s happening at the moment?’.

“But … if they’re saying it’s going ahead then alright, we’re working towards that … you’ve just got to keep the bigger goal in mind.”

Tapper has got a message for the rest of the world too.

“We’re coming, and I think we’re going to give them a good fight,” she said.

READ  The road to Wallabies redemption: Joe Powell finds his feet at the Melbourne Rebels

Rita Ora to head home as The Voice wraps | RB

2021 Kia Stinger review: Sports sedan is unlike anything on the road

Check Also
Close
Featured Posts
How much do Instagram ads cost in Australia?
20 mins ago

Rita Ora to head home as The Voice wraps | RB

With multiple endings in the can, The Voice 2021 has wrapped production. Source link